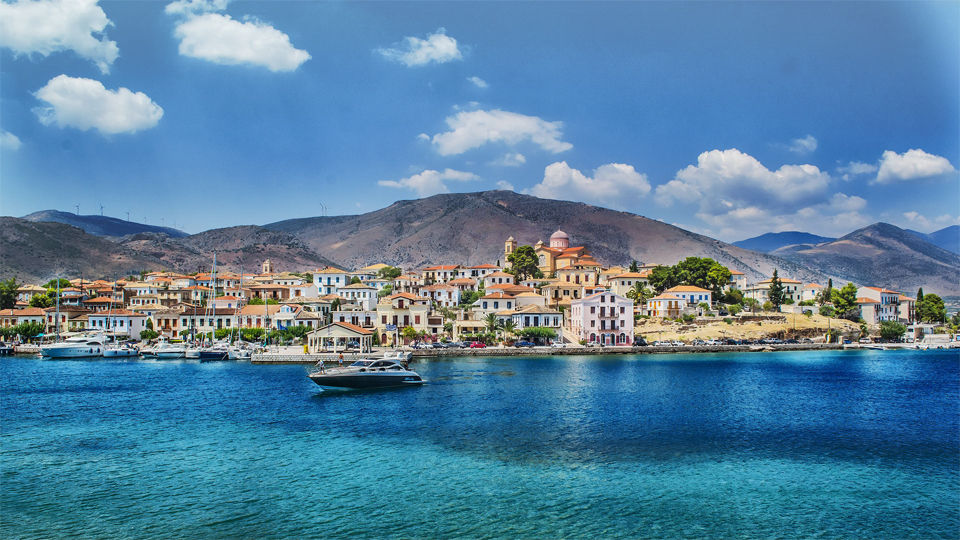 As picturesque and atmospheric as an island and framed by a beautiful mountainside, this coastal town retains all the prestige and stately air of its nautical legacy.

A quiet town in Central Greece, tucked away deep in the Corinthian Gulf, on the coast of the Krisaikos bay, Galaxidi is sheltered from the wind by the reassuring presence of the mountains which range around it.

A place of considerable seafaring repute and a proud contributor to the sea skirmishes of the 1821 revolution, it prospered in tandem with the development of nautical navigation. In the 18th and 19th centuries, many a lugger and schooner set sail from Galaxidi to plough the Mediterranean Sea.

Nowadays, the town has become a living tribute to Greek seamanship, embodying the spirit of the past in the captains’ residences, the neoclassical houses adorned by maritime-themed statuettes, quaint alleyways and picturesque harbors, all guaranteed to fill the soul with dreams of life in and around the sea.

At a close distance from Athens and other Greek cities, Galaxidi lends itself to short, pleasant and tranquil holidays as well as excursions to the surrounding area.

Things to do in Galaxidi

The harbours and stately homes

Starting with a stroll along the first harbor, Agora, walk up the alleyways of the traditional town and feel the aura of prosperity, admiring the restored adobe-built stately homes along the way. In the Holy Temple of Agios Nikolaos, marvel at the two bell towers, the imposing dome and the masterpiece of a carved wood icon screen, while in the temple of Agia Paraskevi, the striking zodiac circle on the floor and the sundial in the courtyard are the undoubted highlights. Also well worth a visit are the old school buildings, now under preservation orders due to their historical and architectural importance.

In the town park you will see two ancient monuments, namely the Tomb of King Locros and the remnants of the walls of ancient Oianthi which used to stand there.

Your acquaintance with Hirolakas, the second harbor, definitely includes a stop at the old Liotrivi (the olive oil press and workshop), whose balcony facing the sea exudes an island feel. Finally, a walk through the pine-strewn Pera Panta ends up at the evocative statue of a Galaxidian Woman waving her handkerchief towards the sea while holding her children in her arms.


The Nautical and Ethnological Museum

Archaeological artifacts, coins ranging from the 4th century to the modern Greek state, the biggest selection of 19th century sailing boat paintings in Greece, nautical items including clocks, timers, instruments, tools, travel logs, sea charts and maps as well as the postage stamp collection, “Argonaftes”, are all among the exhibits of the museum, reflecting Galaxidi’s centuries-old history and maritime tradition.

A Byzantine building at an altitude of 300m dating from 1250 AD, it was here that the monk and priest Efthymios wrote the history of the place entitled “Hroniko tou Galaxidiou”, Galaxidi Chronicle. Aside from its historical and ecclesiastical significance, the monastery offers amazing views of the town.

Morning walks and quiet evenings with food or drink are very much the order of the day in romantic and nostalgic Galaxidi. According to the locals, it is this that makes its magic; Galaxidi, as they say “talks through its silence”.